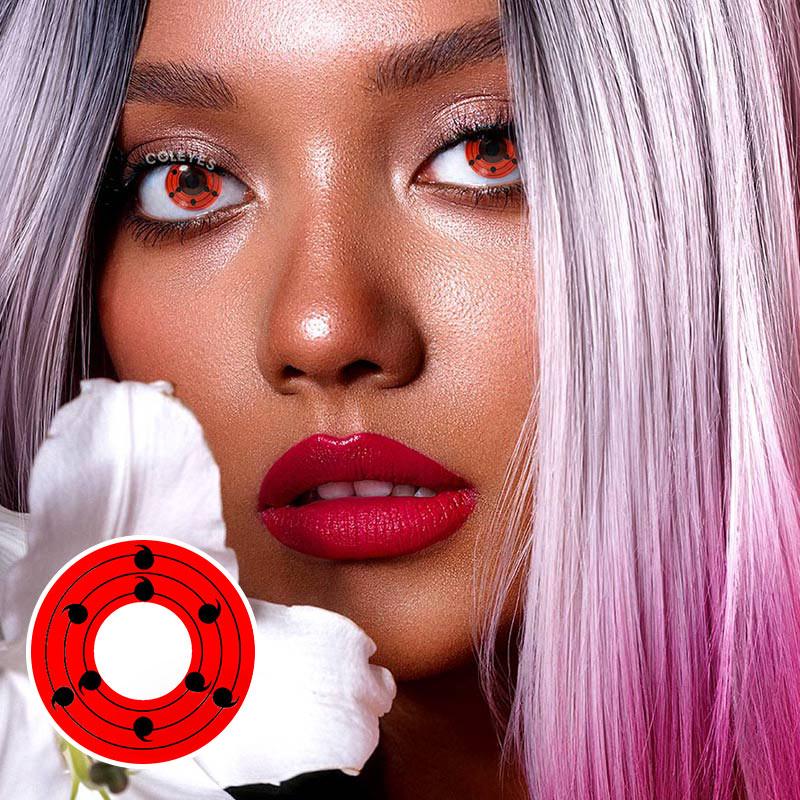 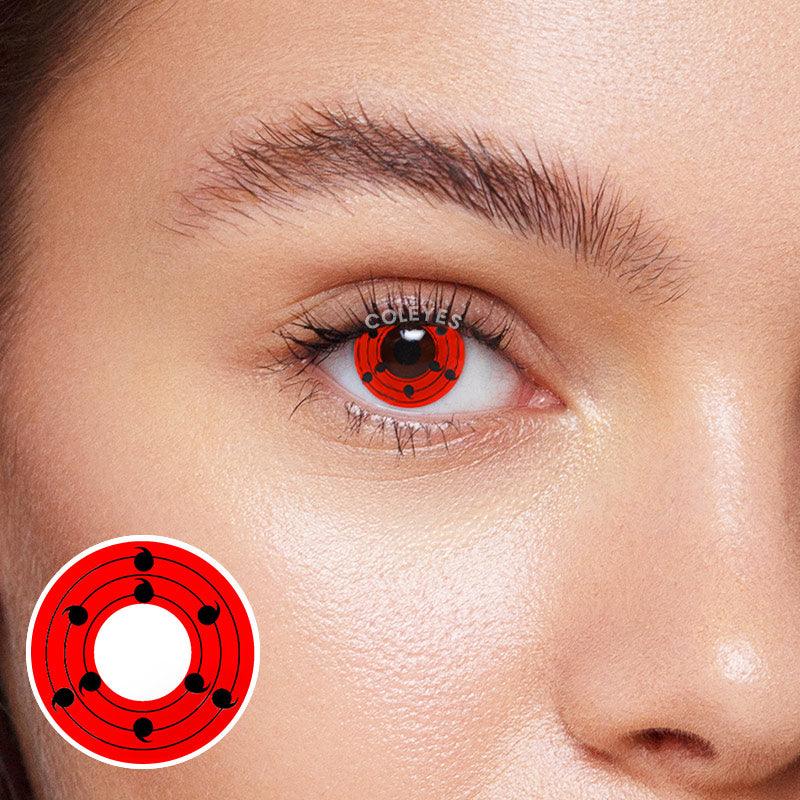 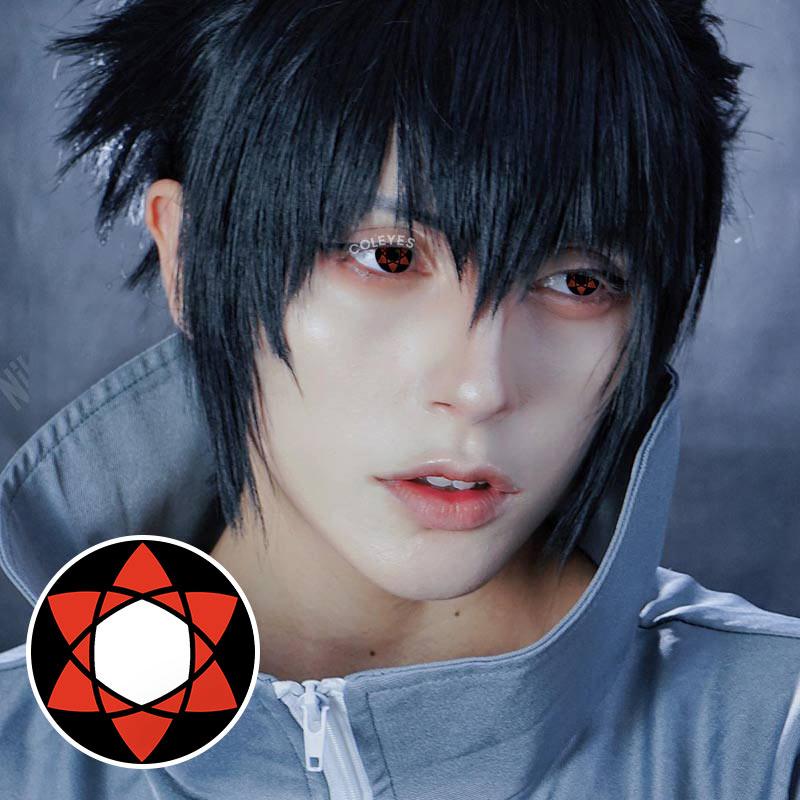 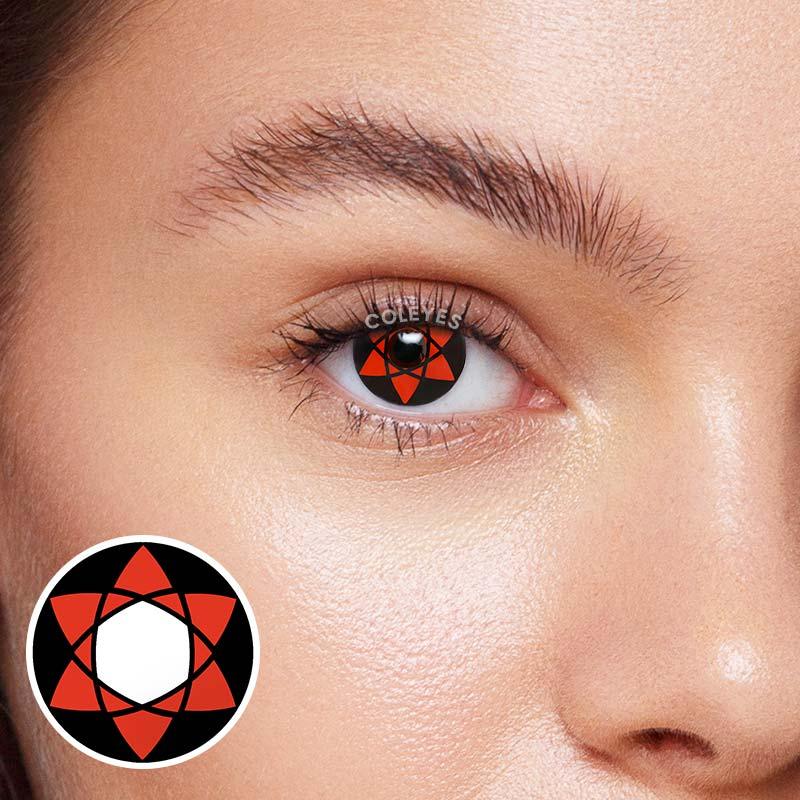 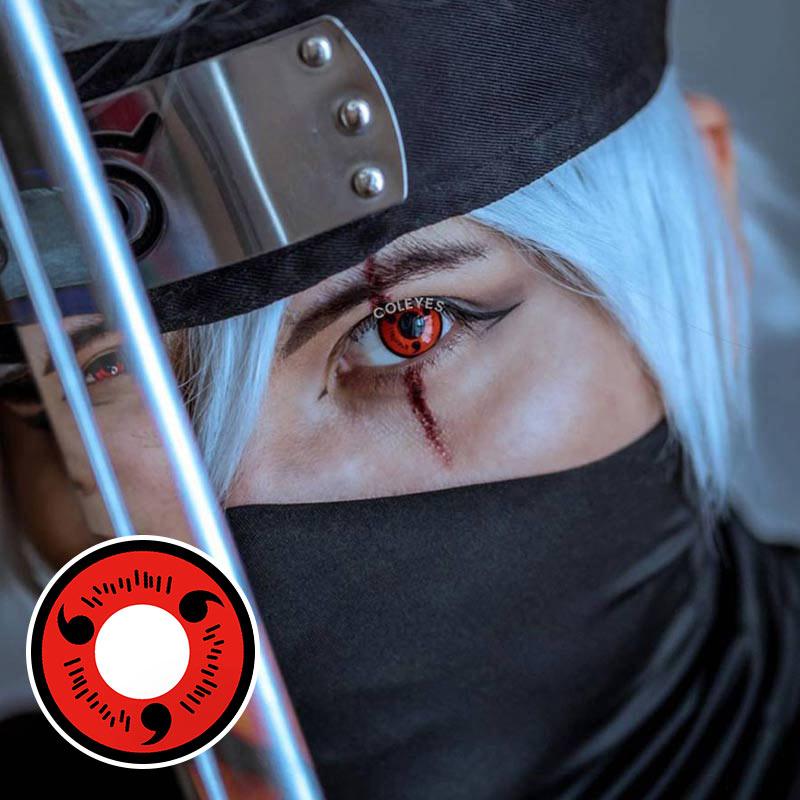 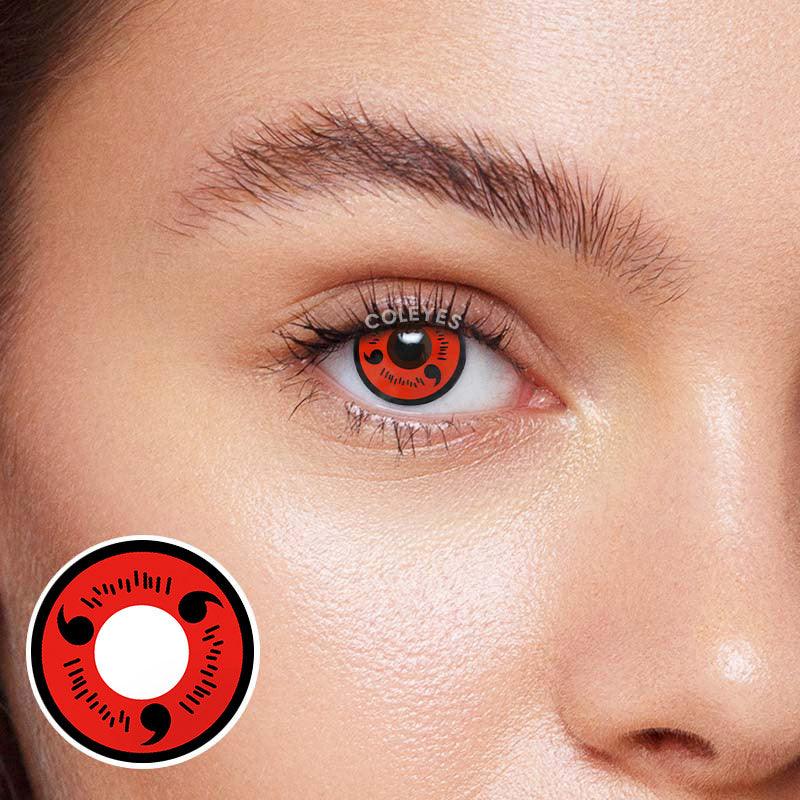 Here at Coleyes, we want to make sure that you have the best experience with our hundreds of various colors and designs. Find exactly what you need at awesome prices and save on multiple pairs!

Sharingan colored contacts are contact lenses with delicate designs around the iris but have a clear spot in the middle for your pupil. This type of contact lens almost looks like a ninja star, but there are a variety of colors and designs.

Sharingan is literal Japanese for “copy wheel eye” as the design is repeated a few times around the iris and the characters with the designs are allowed to copy their enemies’ attacks and learn them themselves.

Sharingan contacts are absolutely stunning and perfect for Halloween, cosplay, or even just making a statement on the street. Change the way that people perceive you and add charm to your look for a very small investment.

Red Sharingan contacts are the most popular out of all the colors because people want to cosplay the anime characters in the famous show, Naruto. However, we also sell blue, purple, pink, and white Sharingan contact lenses so you can find the perfect pair for your cosplay or outfit.

Naruto is the world-renowned anime, Naruto.

Cosplayers love wearing our contact lenses because of their high-quality material and shape.

Wheteher you’re just looking for some great Rinnegan contacts for an Instagram cosplay or you’re getting ready for a huge convention like Comic Con, you’ll want the most epic Naruto cosplay lenses around!

If you’re going for a classic Naruto look, try out our Red Sharingan colored contact lenses! You can’t miss out on this iconic style; we feature lots of patterns to get you exactly the character look you need for your greatest cosplay ever. You can also try out our Rinnegan contact lenses if you want to appear even more powerful and epic.

Here at Coleyes, we pride ourselves on having safe and comfortable contact lenses for everybody in hundreds of patterns and colors.

Not only is our site super user-friendly, but so are our actual contact lenses! Our lenses are bendable, mold to your eye, and sturdy enough that they won’t rip or tear out of nowhere. We know that it can be a little bit daunting if you’ve never worn any kind of contact lens before, but our lenses’ ergonomic design makes them easy to put in and take out, even if you’ve never done it before!

A common problem when you wear contacts, colored or clear prescription, is your eyes drying out. Our lenses are breathable and thrive in moisture, meaning that your eyes will stay wet and happy!

Our lenses are up to .04mm thin (basically, CRAZY thin!), making them SO MUCH thinner than most colored contact lenses on the market. This thinness makes it comfortable for daily wear, and the gorgeous patterns that our Sharingan contacts have will make you a star among others.

All of our contacts are yearly, meaning that you can wear them daily for an entire year before having to throw your pair away.

Introduction to the Sharingan

The Sharingan is a mystical eye power, or Dōjutsu, (literally meaning eye technique), and is considered to be the second most powerful of the Three Great Dōjutsu, with the strongest being the Rinnegan, and the opposite being the Byakugan.

The Sharingan’s base ability is to copy other simple “Jutsu” or techniques. Each “tomoe” (looks like a black comma) signifies some pain that the owner of the eyes has gone through. You can have up to three tomoes, and you are more powerful for each one.

If you kill your best friend, you awaken the “Mangekyo Sharingan” which is a more powerful form of the Sharingan. This new form gives you powers based on your personality, including:

It also increases the ability of the previously mentioned copying ability. However, there is one last, final form, The Eternal Mangekyo Sharingan. The only flaw of the MS is that it eventually causes blindness. The only way to circumvent this blindness is through an eye transplant. If your eye is transplanted and your new eye is from a family member who also had MS, you gain the EMS, and all powers of the MS, without the blindness.

Fun fact: Although ninja stars (AKA “shuriken”) can be used to kill, they were most commonly used to distract the enemy by making them jump, duck, or block the incredibly sharp stars that were being hurled at them, whereas modern pop culture has made it seem like they’re death machines; in fact, samurai and police were the ones that used shuriken. Sharingan contact lenses often bear resemblance to ninja stars, due to some of the star-shaped patterns that can be seen around the iris of the lens.

This is what you’ve been waiting for!